A review of the 1816 Gravel bike by UK Gravel Co

Recently I was invited down to the Chiltern Hills by 1816 Cycles to have a look at and ride their “new” gravel bike, the L’enfer du Nord. I’ve put the word new in inverted commas because the original design was begun and a bike released into the wild in 2020. I’m sure I don’t have to go into what happened to the world that year, It wasn’t the best time to launch a bike even with the sudden scramble for bicycles and components the globe saw. You couldn’t exactly pop over to the far east to check out the frame manufacturers and talk to sample makers on a whim. Happily though those two years have allowed 1816 cycles to perfect their design, this latest bike for example now has a healthy tyre clearance suitable for UK conditions and a much neater and integrated seat post clamp. 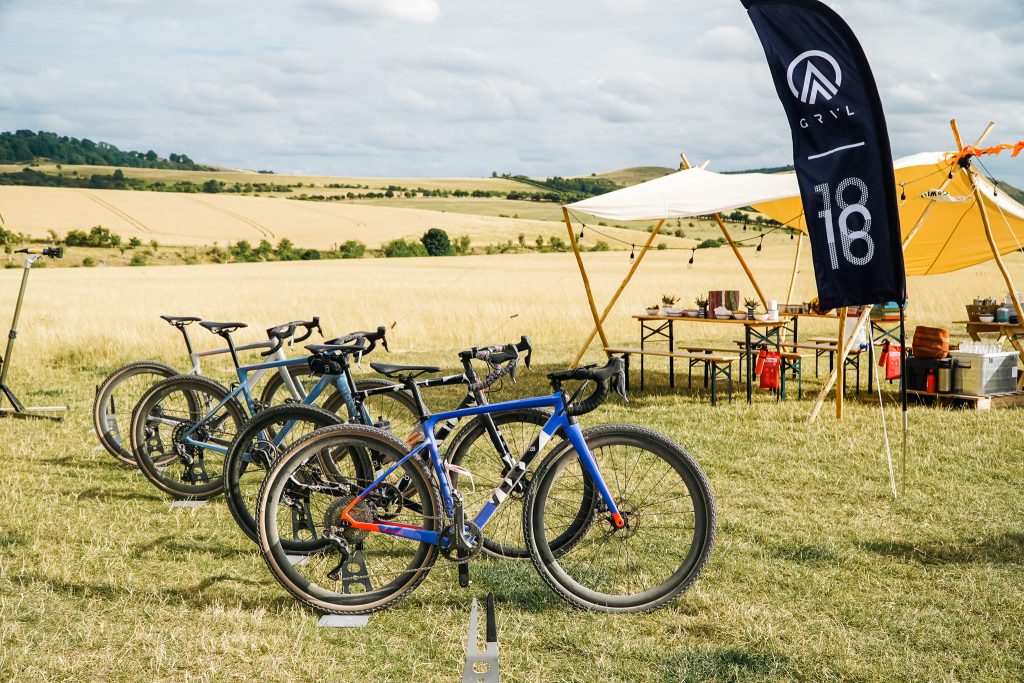 There are three guys behind this brand (incidentally 1816 is the unofficial year the two wheel “bi-cycle” was invented) two engineers Tink and Jonty and a sportswear designer Stuart. Apart from those skills the three of them have years of MTB, cyclocross and road bike riding experience to put into the bike and it really does show. This isn’t a bike designed to just look good on social media, although it achieves that too, it’s a bike designed to have the best ride quality, to go fast if needed but without compromising the riders comfort. Read on to see if it matches the design brief with an ordinary rider on it.

I got to ride the bike in the first picture and although it was dripping in a Sram Red AXS mullet electronic groupset, mullet meaning the shifters/crank etc are from Sram’s road group but the rear cassette and mech are from their MTB group. This means you can fit a huge range of gears to get you up any slope. The wheels were mid level Zipp 303s, a great all round wheelset for gravel and road. This review is about how the bike rides and the components do have a lot to do with that experience but the main focus should be about the frame and fork.

However as 1816 do offer three builds (as seen with Sram mullet, Shimano Di2 and a dream build with Sram AXS, Enve and Chris king) I will say that the Sram AXS gears are sublime, very intuitive to use and were faultless throughout the weekend. Zipp 303s wheels are great too, stiff and yet still comfortable. The wheels came with 43mm Gravelking tyres which were nice and fat on the rims with still plenty of room in the frame. As the weather was dry and the trails dusty they were spot on for rolling resistance and added to the comfort.

The chiltern hills are made up of a rolling chalky escarpment and the trails there are really a gravel bike paradise. Apart from overly rocky terrain there’s pretty much all the conditions you’ll find in the UK. Twisty singletrack, rooty shutes and climbs, open grassland and field edges, off camber eroded chalk paths, tarmac and even some genuine US style gravel!

The bike side on looks fast, there’s a gentle slope to the top tube, the rear chain stays are asymmetric to allow clearance for the 1x chainset (you can fit 2x if that’s you thing) and the bottom bracket area is beefy to push all your pedalling power to the rear wheel. The seatpost is 27.2mm. The cables, if you weren’t running wireless are all internal making the bike look super clean.

The seat stays looking from the back of the bike are flattened to build in some compliance, both wheels use the industry standard 12mm bolt through axles. the fork is straight bladed and profiled to give side to side stiffness but front to rear compliance. The head angle on each size is slightly different, the medium is 72 degrees which is effective at overcoming rough ground without being slow to steer. The bottom bracket is pressfit, not my preferred choice but it had zero problems or creaks throughout the test.

My first ride was around the campsite to check the seat post height and my position, the handlebars were the owners own preference and were 42cm one piece bar and stem with only around 15mm of spacers under the stem. It was a little lower than my personal ride but nothing I could do to alter it. The frame size was medium which although lower at the front than I’d like felt spot on reach wise.

Riding away from the campsite our first obstacle was a gate we had to lift the bikes over. Straight away the difference from my usual bike became apparent, this bike is light! I can’t tell you exactly how light as I don’t camp in a field with a set of scales but I will say it doesn’t feel too light. that might sound strange but bikes that are super light tend to be skittish riding down rough descents as they literally bounce off every root or stone. This bike was light enough not to fatigue you over long distances but heavy enough to be very well mannered downhill. This was proved straight after that gate lift as we sped down the field into a sharp right hand rutted turn.

I’d not really had time to get used to the bike but it delivered me to the bottom of the hill with a big grin on my face. A road section next allowed me to press on the pedals and try out the power transfer. No complaints here, stand up and pedal and the bike responds instantly, no detectable side to side movement. I tried the same when we got to a long section of towpath with multiple small rough climbs past lock gates. I was either putting the power down while sat on the saddle or standing to sprint. Sat down the skinny seatpost and seatstay profile of the frame meant I wasn’t bounced around and could concentrate on looking where I was going and choosing a good line avoiding erosion on the towpath surface.

Downhill the bike was fab, it’ll hold a tight line if needed but shift your position forward a little to allow the rear wheel to drift and kick up some dust and it feels like you are 10 again ragging your bike round the woods with your mates. I know the three guys designed this bike to be on the faster side in a point A to point B way but designed in or not it’s fun just to mess about in the woods with!

A new bike takes a few rides to get used to but I felt at home straight away on the L’enfer. It encourages you to stay on the pedals that little bit longer and leave your braking that little bit later, in short it’s a lot of fun. most importantly for me though was the comfort level while still being able to speed along. I was suffering from a bad back before I got to the campsite we were staying at and I did wonder if riding was going to make it worse. In the event it didn’t and in a way it was the perfect test for the claims made for this bike. Go faster for longer is what this bike is about and after around 50 miles on a mix of surfaces it enabled me to do just that. (although as the other riders on the weekend will attest my fast is probably different to their fast!)

Tink, Jonty and Stuart set out to make a no compromise idea to build the very best gravel bike out there. They’ve even added a hydrophobic coating to the paint! it’s definitely on the racier end of the gravel bike spectrum, it’s cool how gravel bikes are diversifying into different camps now. calling your bike L’enfer du Nord (hell of the north) is a big clue to how this bike was envisioned by the team. Naming your bike after one of the toughest, roughest road bike races in the world, Paris-Roubaix is a bold statement. With the right rider this bike could do well in that race or races such as Unbound Gravel in the USA so in that sense they have succeeded in their design brief, however I also think they have failed, here’s why..

Having designed the bike to go fast over long distances without destroying the rider they have also, maybe inadvertently, but I suspect because of their back round in UK off road riding come up with a great bike for just having fun on. Yes it’ll win races but it’ll also put a big grin on your face riding around your local woods for an hour after work or on a weekend away with your mates. Ok it’s only got two bottle cage mounts but if you really wanted to hang bags off it you could but what it excels in is going fast, going far and having fun and there’s no downside to that.

1816 Cycles offer 3 builds but also can supply framesets, They can also custom paint your frameset to whatever colour scheme you like, they’ve done bikes to match owners cars. They are definitely at the higher price end of the scale but are much more exclusive than brands in the same price bracket.

Find 1816 cycles website here, 1816Cycles.com for more details. Get in touch with the guys if you have questions about builds, there aren’t many companies where you’ll get a reply from the person who designed the bike.

Pics and review by ukgravelco, Dan and Jon.Snaps special mention to WildCycles for hosting the event

Below is a Vlog I put together about the weekend of the L’enfer du Nord launch. please subscribe to the youtube channel and check out the other videos.